Alycia, Carrie’s Mom, shared with us her thoughts on Carrie…

What do you want people to know about Carrie?

“Carrie is a happy, smart, and beautiful 4 year old little girl. She was born in Kentucky but her daddy is in the Army, so home is where the military sends us. Carrie has significant global developmental delays as well as some sensory problems and unrelated other issues such as a benign heart murmur. Carrie has seen over 30 doctors in 9 fields of specialty at over a dozen hospitals in the U.S. all without receiving a consistent diagnosis. That does not mean that she's never been diagnosed. Carrie has received a few diagnoses, but shortly after each one, one test or another shows a change or something different and the diagnosis gets blown out of the water. There are a couple theories as to what could be causing her issues, but nothing definitive or able to be tested for. Carrie is so very bright. Many people underestimate her because of her physical and verbal delays, but under that calm exterior lay a very bright little girl. Currently she can walk. She uses her walker for longer trips (like racing to recess) but is making progress every day that amazes everyone. She's also learning to talk. She enjoys books and art and dogs. To paraphrase Carrie into a single word, I'd go with... awesome.”

How does she inspire others?

“Carrie is so motivated to achieve. November 9th, 2010 a neurologist that we were seeing told us that based on her abilities at that time, the prognosis for her was that she would likely never walk or talk in her life, but nothing stops Carrie. The very next month she took her first step and now prefers to walk versus crawling. She also has about a dozen word vocabulary and is very verbally motivated right now, picking up words faster than ever. Even with these huge strides in speech and gross motor, she works hard at school learning to trace, recognize shapes (she can recognize almost all of them now) and count. Despite having a late start on those things because we had worked so hard on her delays, she's catching up fast and doesn't let anybody dictate what she can accomplish. She amazes me and everyone that knows her more and more each day. Along with all her hard work, she's a genuinely joyful child. There can be so much frustration from the speech barrier and the fact that she can't yet keep pace with her peers, but she doesn't let that change her attitude. She's sweet and kind and a real joy to be around.”

How have you changed your life to incorporate Carrie?

“Carrie is in 5 therapies a week plus attends school 2.25 hours a day, 5 days a week. So much of our days are getting her to and from therapies and the 6 different kinds of doctors she's currently followed by. I've learned more medical lingo and processes than I ever thought possible. I've also learned a lot about sensory problems. We do things a little differently like going to restaurants earlier in the day because it's less over whelming and scary for her and things like hay rides in the fall are touch and go as to whether she can tolerate them. We have to learn basically a new language with her. She doesn't speak or sign, but makes her points and thoughts very clear if you know what she's trying to say. We speak "Carrie" quite fluently now. We don't do regular crafts. We try very hard to make sure that even the fun things that she does at home practice some kind of skill, whether it be fine or gross motor, or something along those lines. I've also learned to stand up to people. I was more go with the flow and trust anyone in a position of authority, but due to some difficulties we've run into, I've learned how to stick up for her. We are a military family and move often. Each time we reach somewhere new her pediatricians are ambivalent about getting her into the therapies she very much needs because of her lack of diagnosis and in situations like that, I've had to learn how to stick up for her needs.”

Carrie uses a few different pieces of adaptive equipment to help her get around more efficiently. Her Kaye Walker helps her continue to be independent with her walking if the distance is over 20 feet.

For transportation to school on the bus, Carrie uses her Convaid Scout Transport Push Chair. And when Carrie is in the mood to have fun, she choose to cruise around on her AmTryke. 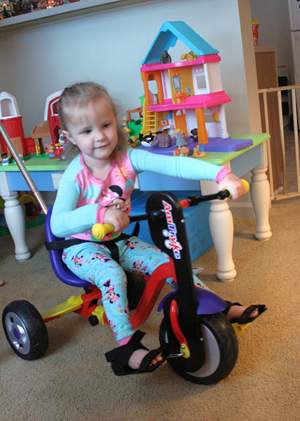 Alycia explained that she never imagined that she would be able to deal with all that comes with a child with special needs. She had never had any experience with anyone with a disability. Despite the lack of experience, her life has turned out better than she expected. “Carrie helps me appreciate things in ways I never thought possible. I've become so grateful for all the little things. Carrie is kind in a way I've never seen in a child. Kids grow up too fast and because of her delays, I get to hold on to my baby Carrie just a little bit longer. We fight so much harder for each of her accomplishments so we get to appreciate all of her changes more than if they came easily to her. This house is like cheer leading camp with all the dances and celebration we do for each of my girl’s milestones.”