This is William and he is 5 years old. William is a twin. His sister, Ella, does not have any disabilities. When their Mom, Erin, was 26 weeks pregnant, and ultrasound revealed that the ventricles in William’s brain were large. The doctors weren’t able to give Erin and Wayne, William’s Dad, definitive information about William’s brain at that time. They weren’t sure if he would survive the pregnancy. The next 14 weeks were a scary time filled with lots of unknowns. Both William and Ella were born full-term. Ella was able to go home right away. William was in the NICU for 1 week since he needed assistance with feeding and needed oxygen. 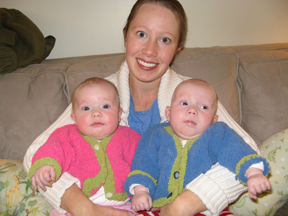 Once William was born, the doctors were able to confirm that the ventricles were large because they were filling up space where parts of his brain were missing. When he was 3 months old, William started experiencing seizures which are now controlled with medication. It was also determined that William was visually impaired. The doctors eventually gave him a diagnosis of Lissencephaly. Unfortunately, this news gave Erin and Wayne a name, but not a lot of information. The doctors were not able to answer their questions about life span or level of disability. They were forced to take things one day at a time. Erin and Wayne decided early on to provide William with every opportunity that they could as a family.

Early Intervention Services began in their home for William when he was only 3 months old. Erin credits William’s Physical Therapist with helping them acquire adaptive equipment to help him develop. To this day, William still uses several pieces of equipment throughout the day at home and at school to help him get the best experiences out of life:

Despite William being dependent for eating, dressing, moving around, etc., he loves to be included in everything. His family sees his spirits lifted when he gets to do things with Ella and the rest of the family. He’s not content to sit back and watch everyone else. William’s family includes him in every activity and outing such as ice cream eating, pumpkin carving, family trips, and weddings!

We asked Erin a few questions...

What are your biggest concerns for William?

His health is a major concern, especially in the winter months. William is very susceptible to respiratory infections and cold winters make it extra hard for him. She also mentioned that his seizures can sometimes give him setbacks on skills that he has worked so hard to develop – i.e. communicating “more” or “all done” by activating a switch.

What do you want people to know about William?

Erin responded with: “He’s a great kid! People would comment on the twins when they were babies, but now that there are visible differences, people don’t do that anymore. I want people to not be afraid to engage him. Treat him the same as any other kid. We’ve educated Ella’s friends to help them be more comfortable around William and others with disabilities. We’ve found that educating people when William is meeting them for the first time is the best approach.”

What is the most rewarding part of having a child with special needs?

“He makes you appreciate the milestones that he does meet. Having Ella as a direct comparison makes it more evident as to how hard he works. We’ve learned to appreciate everyday life…he slows life down in a positive way. He’s a fighter – and a great snuggler.”

Would you change anything about William?

“Some may disagree, but sometimes I wish I could take his disability away. It is so hard to see him work so hard and then have setbacks from his seizures or from sickness. We do accept who William is, but we wish he didn’t have to struggle so much.”

What advice would you give other Moms?

“Enjoy your child and the time that you have with him/her! And get connected with other families that have similar struggles. These connections have helped me deal with the lows and joined with me in celebrating the highs. Look for organizations like Parent to Parent of New York State. This organization has helped us in so many ways.